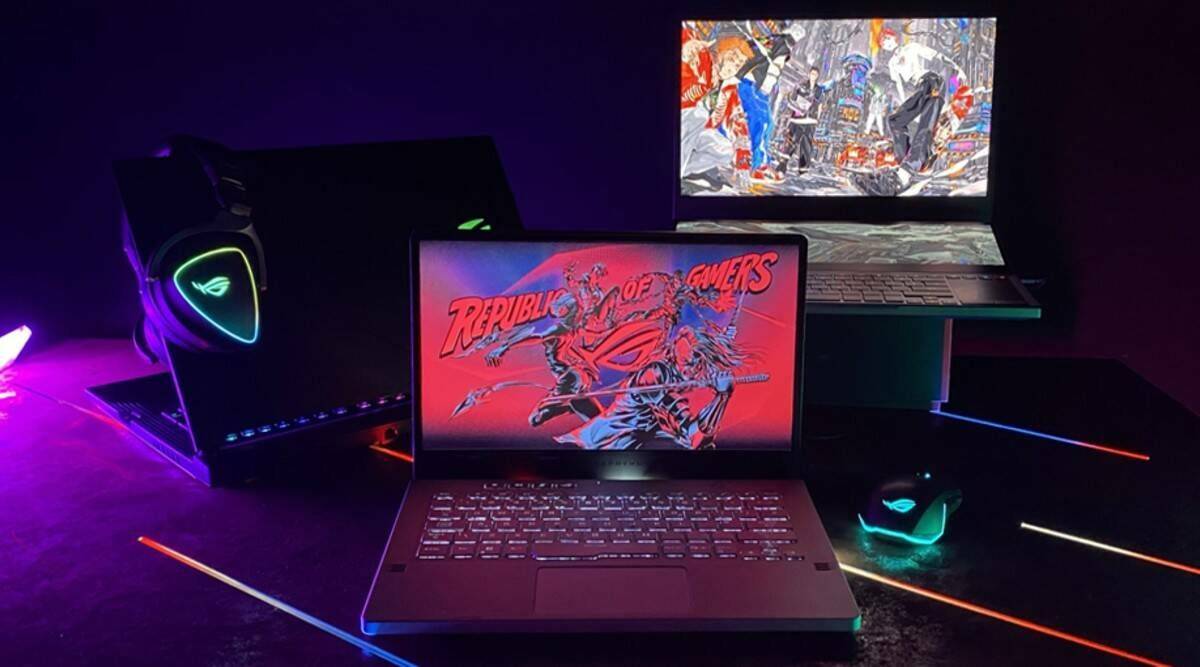 With the advent of the pandemic, software and hardware companies have flourished. Software engineering for gaming has prospered as well since people were staying at homes and wanted to indulge themselves in some interesting activities. The previous year has given rise to some of the most amazing portable and playable laptop devices that one could surely look for when he has made up his mind to buy one.

The high-end offerings of the most suitable laptop that should be enlisted among the best 5 gaming laptops of 2022 would be detailed here. The new models that are called powerhouses of gaming can do almost all the tasks that a gamer is looking for. The configurations, RAM, and screen size are all provided along with mechanical keyboards for the best gaming experience.

The Razer Blade 15 Is The Perfect Gaming Laptops For Gamers: Here’s Why?

Razer Blade 15 has proven that it is undoubtedly one of the top-rated gaming laptops this year. It is due to its unmatched specifications like CPU that is 12th Generation Intel Core i7 and Core i9, RAM that is up to 32GB, screen size that is 1080p, 1440p or even 4K, storage that is up to 1TB SSD, battery that is 80Wh and weight that is 4.63 lbs.

People have used Razer Blade 15 Advanced before that has 10th Generation Intel chip but now we have its modern version as well with upgraded features. It has CNC-milled aluminum chassis for being its predecessor. Now, it has the ability to house one of Nvidia’s latest GPUs with ETX 30-series.

Performance with sleekness and portability of Razer blade 15

For a small chassis like this, it is unbelievable to have 16GB RTX 3080 Ti that helps in providing greater processing speed. Razer Blade 15 should not be underestimated for its slim design; rather it is sleek and portable, yet has the robust gaming features any gamer would ask for. Its outstanding performance with storage capacity is matchless.

The number of configurations that Razer Blade 15 offers are countless. The versions that are available from, RTX 3060 Base Edition till RTX 3080 Ti Advanced, any type of gamer would definitely find any suitable laptop of his choice. The powerful graphics that these versions provide are due to their realistic ray-traced graphics that have radical AI features.

The display is of supreme quality since Razer Blade 15 has a Next-Gen display for meeting the needs of high-end gamers. It has ultra-fast 360 Hz FHD for a fierce gaming experience. For screen clarity, it is endowed with OLED UHD for working creatively.

With such high and heavy performance, the laptop is provided with a vapor chamber for maximized cooling efficiency. The heat is dissipated quietly and proficiently from Razer Blade 15 with evaporation and condensation mechanisms of internal fluid. It assists the laptop to run uninterrupted and handle the intense gaming load effectively.

Razer Blade 15 is equipped with Wi-Fi connectivity as well for greater convenience in gaming. The built-in Wi-Fi 6 and UHS-III card slot for storage make it a suitable option for avoiding adapters and carrying it easily anywhere.

The Asus ROG Zephyrus G14 Review: Is This The Laptop Of The
Future

It is not necessary to have sleek and powerful gaming laptops to serve the purpose only since Asus ROG Zephyrus G14 is a lightweight and speedy gaming laptop that has interesting gaming features. It has a balance between portability and performance for the price that it is available in the market. Some of its notable features are CPU that is up to AMD Ryzen 9 5900 Hs, Ram that is 16 GB, screen size that is 14 inches and 1080p, storage that is 1TB SSD, the battery that is 75Wh, and weight that is 3.53 lbs.

Although it is considered somewhat loud as compared to the other gaming laptops, Asus ROG Zephyrus G14 is still trustworthy in terms of its performance with its RTX 3060 update with smart chassis. The base speed is 3.1 GHz. For boosting speed, 4.5 GHz is the maximum speed. Further, it has 16 threads and a 16MB L3 cache.

Another interesting feature is that Asus ROG Zephyrus G14 is enabled with several PC games and a one-month subscription from Xbox Game Pass. The subscription is added with the purchase of the gaming laptop with high-quality PC games on its Windows.

The display screen of Asus ROG Zephyrus G14 is outstanding as well as it has an IPS level anti-glare panel. The contrast ratio is extraordinary with an adaptive-sync technology. The screen display is considered harmless for the gamers’ eyes as it is Pantone validated. The graphics are boosted with Nvidia GeForce RTX 3060 with dynamic power.

The device has the software installed in it with Office Home and Student 2019 along with lifetime validity. There is an anti-virus installed in Asus ROG Zephyrus G14 as well that has a one-year warranty. The operating system is pre-loaded with Windows 10 Home that has a lifetime warranty.

Dell G3 15 is deemed as one of the most budget-friendly laptops among the gaming laptops for the year 2022 that has exceptional battery life. It is one of the most affordable laptops with high-performing features under $1000. It could also be considered an entry-level gaming laptop and easy to use for beginners.

Dell G3 15 has made some improvements in comparison with its previous model. It has become slimmer and the design is sleeker. It has a textured plastic finish to its body that does give it a flashy look. Its solid outlook would not nominate for any ‘looks’ award but it is strongly built for the said purpose.

Weight and portability of Dell G3 15

It is good in portability as it can be put in any bag and could be carried along anywhere conveniently. Its chassis measures 0.85 by 14 by 4 and 10 inches. Its weight is 5.18 pounds. Although it is not light in weight but could not be considered a burden when it has to be carried.

The display of Dell G3 15 is 144Hz with 15.6 inches screen. It has an HD display for great quality features during gaming. It has modern standards of screen sharpness but could prove more while the user is gaming. The graphics are Nvidia 1650 Ti and has a special anti-reflective feature for the screen. The color scheme is eclipse black so that eyes do not get harmed by continuous gaming. Its screen could be taken as just above average since, for multiplayer games, a higher functioning screen is required.

Dell G3 15 is equipped with Windows 10 operating system. The inside CPU manufacturer is Intel. The processor is 10th Generation i5-10300H that has an 8MB cache, up to 4.5 GHz along with 4 cores. Altogether, it gives a high-end appeal with a toned-down look. It is for this reason that it not be taken as only a gaming laptop.

The memory and storage are not a problem in Dell G3 15 since it comes with 8GB, 2x 4GB, DDR4 upgradable memory to 16GB. It helps the gamers to enjoy an interference and glitch-free gaming experience. It also comes with an HDMI port, Bluetooth connection, Wi-Fi 6 connectivity, USB port for 3.1 and type C ports, and an Ethernet jack on the left side. These extra features enable the laptop to gain faster gaming connections and downloads for an extra adventure. It even has two USB ports on the right side with an additional headphone jack along with and DS card slot.

Lenovo Legion 5 Pro is one of those laptops that could give serious competition to some of the high-performing gaming laptops. When a combination of mobile Ryzen 7 5800H and RTX 3070 is obtained, it could deliver results that are most wanted by the gamers. The modern games could be run with convenience with such added features.

Its screen is s standout feature that assists the gamers to have an experience out of this world. It has a QHD 16:10 165Hz screen with a panel of suitable brightness. It would seem that there is no difference between whether the user is watching a movie or playing a game. A vast number of games could be played with 2560 x 1600 resolution that could be fixed with a maximum number of settings.

Lenovo Legion Pro 5 is massively a high performer when it comes to gaming since it is facilitated with powerful RTX 3070, which is considered faster than some of the 3080s. The entire package of the laptop could be deemed attractive with DLSS and ray tracing extras for the money one wants to invest into it.

Further, it should be noted before buying that it could be used as a notebook along with gaming. The vertical space that it is provided with, is for using it in a professional way. Navigating the website and playing games, both are not a problem with Lenovo Legion Pro 5 as it has 16:9 panels for this very purpose.

Dell G3 15 is equipped with Windows 10 operating system. The inside CPU manufacturer is Intel. The processor is 10th Generation i5-10300H that has an 8MB cache, up to 4.5 GHz along with 4 cores. Altogether, it gives a high-end appeal with a toned-down look. It is for this reason that it not be taken as only a gaming laptop.

The display performance is further investigated that disclosed it could be suitably used both indoors and outdoors. Lenovo Legion Pro 5 has a contrast and brightness ratio apt for gaming exhibitions and vibrancy required for the ultimate experience. The black pint could slightly be blacker sometimes in the areas of the game where more blackness, still, is with impressive gameplay attributes, it could be disregarded as well.

The thickness of the device is 26.8 mm and 356 wide. As compared with standard Lenovo laptops, it is a bit thicker. The greater thickness however could be ignored with its strong built and classical screen performance that any gamer would have desired. Additionally, it has memory storage of up to 16 GB with a 5th Generation processor from Ryzen and has 8 cores.

The Razer Blade 14: The Best Gaming Laptop Money Can Buy.

Razer Blade 14 might not be perceived as one of the finest gaming laptops that could top the list but it has apposite features that helped it to make it to this list. It has 14 inches screen with Windows 8.1. It has Ryzen 9 5900HX processor inside it that creates its own niche. When the gamers are to play demanding games, the AMD Ryzen 5000 Series provide a dominant performance in software compiling and video rendering.

As compared to Blade 15, it could not be as portable, still, it ticks this box for the purpose. Overall, it is slightly thinner when compared to other Razer laptops, reasonable 15mm thinner and 35mm narrower along with an aluminum frame. Its weight is less than 4 pounds. It has a sturdy and premium outlook. The outside appearance is attractive and feels good to hold.

Razer Blade 14 comes with Nvidia’s RTX 3060 graphics and a 1080p screen 144Hz. Gamers who have used it consider it an ultra-gaming notebook. The 2nd Generation processor has an RTX architecture with realistic ray-tracing graphics. There are radical AI features that give it a lead of powerful gaming laptops. The processor is quite faster and more efficient as Ryzen chips have proven these qualities in both laptop and desktops products.

Today’s gaming laptops are all about heat control since no gamer would want to play a high spec game and find his laptop to be overheating. The chassis that Razer Blade 14 is armed with gives it this benefit. It has a vapor chamber cooling for maximum thermal control that supports in convenient heat dissipation and evaporation for managing intense heat loads during gaming.

Razer Blade 14‘s keyboard is unique since its touch system is quite better than those of standard Windows ones. The keys are individually placed and are easy to put fingers on while preventing the slipping of fingers from one key to another while gaming. They have a colorful backlit feature that gives a distinctive typing experience.

Some of the additional attributes are two USB ports including Generation 2 Type-A ports, USB 3.2 Generation 2 Type C having power delivery, and display port 1.4. The charging is supported with a 20v USB-C charger. It also has an HDMI output of 2.1.